There are more people that talk about Christ and agree on His teachings than those who actually walk in holiness. The proof is found in churches for instance: Though a church may have many members who shout “hallelujah” on Sunday morning, only a few live according to the Word of God. At the time of Christ, thousands of people sat at His feet to listen to His preaching, yet when He was crucified, only a number stood at the foot of the cross to support Him. I personally knew several classmates in college who claimed to be Christians and posted Bible verses on Facebook; however, none of them really lived a life of sanctification. Are you also listed in that crowd? You may think by handing out tracks or CDs to your friends about Jesus that it would bring them closer to the Lord (it’s true the Holy Spirit at times can convict souls), but, in general, if your life doesn’t walk the talk, your ‘religion’ will only be proven false to them. We can talk about how great it is to come to Christ, yet we’re the same people who fight, get angry, insult, gossip, are depressed, lust, and hop from one broken relationship to another. How do we then expect to reach our campus for Christ? My answer is : By acting more and talking less.

In Acts 16, we read the apostles Paul and Silas went on a missionary work to Philippi;, after delivering a demon-possessed girl, they were persecuted for their faith, verses 22-23 say: “Then the multitude rose up together against them [Paul and Silas]; and the magistrates tore off their clothes and commanded them to be beaten with rods. And when they had laid many stripes on them, they threw them into prison, commanding the jailer to keep them securely.” One would think that after such a beating Paul and Silas would become angry and vindictive, nevertheless, they began to pray and sing hymns to the Lord in prison. Later on, when the jailer wanted to commit suicide after discovering that the prison doors were opened, it was the same Paul who stopped him. The result of Paul’s and Silas’ faithfulness in obeying the Word is in verses 29-30, 32-33: “Then he [the jailer] called for a light, ran in, and fell down trembling before Paul and Silas. And he brought them out and said, “Sirs, what must I do to be saved?” Then they spoke the word of the Lord to him and to all who were in his house…And immediately he and all his family were baptized.” This is such a powerful example of how to minister to people! Paul and Silas first lived out the gospel by not complaining about the persecution or their torn bodies, then they praised the Lord, and lastly, instead of letting the jailer die because he was holding them captive, they rescued him. Consequently, the jailer wanted to be born again, next we see both apostles preaching to him. THEY ACTED FIRST THEN TALKED LATER. Another example is when Jesus was at the well and started a conversation with a Samaritan woman in John 4. At the time, it was taboo to speak to Samaritans, yet Jesus bridged the gap with His humility and selflessness. After preaching to her, the woman and her village later became saved: “And many of the Samaritans of that city believed in Him because of the word of the woman who testified, “He told me all that I ever did.” So when the Samaritans had come to Him, they urged Him to stay with them; and He stayed there two days. And many more believed because of His own word” (John 4:39-41). 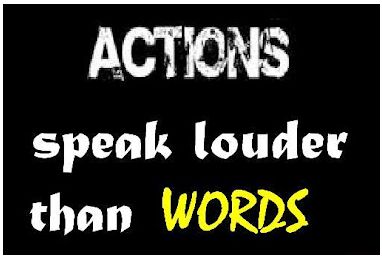 What we try to do on campus is spend time preaching at our friends and bombarding them with the Word of God. The salvation message should be attractive and not repulsive to the lost. I’m not saying that we shouldn’t share the Gospel, however what I mean is that before we do so, we must first ensure that we live a blameless and humble life before the Lord. Acts 1:1 says that Jesus began to primarily “do” the Word of God before He “taught” it. If Paul and Silas behaved nastily, the jailer wouldn’t have been interested in what they had to say. I mean we indulge in the same practices of the world by cheating during exams, watching filthy things on TV, and mocking others, and concurrently expect our surroundings to be transformed? It doesn’t work that way.
James 1:26 says: “If you claim to be religious but don’t control your tongue, you are fooling yourself, and your religion is worthless.” We need to control what comes out of our mouths or else our ‘religion’ or our Christianity is vain. Jesus said that the mouth speaks out of the abundance of the heart (Matthew 12:34). And who can clean our heart better than the Father Himself? Who can control our tongue better than the Holy Spirit Himself? I’m telling you ladies, if we are serious about being light on campus, we need to considerably repent, ask the Father to cleanse with the blood of Christ, and pray perseveringly and daily for the fullness of the Holy Spirit in us. Our Father will honor us if we honor Him.